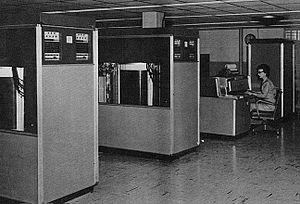 A hard drive is a input-output device, which is used for storage of different data, stored on it in form of files. Today, a hard drive is a part of every computer, desktop PC or laptop, and it is also built in various other electronic devices, like USB drive, portable mp3 or mp4 player, digital camera and other devices we can’t imagine our life without anymore.

The essential parts of every hard drive are: round plates, mechanism for rotating discs, read-write heads, mechanism for moving them and a controller. Data, which are stored on a hard drive, are written on a magnetic layer, which is placed on round plates, usually made of aluminum. When we want to access our data, read/write heads are activated and they access wanted part of a disc where our information is. Round circles are rotating with constant speed up to 15000 rotates per minute. They rotate around their axis, and read head reads written data from height of few nanometers and sends them to the computer. The process of writing data is similar, just in the opposite direction, instead of read, write head is activated.

If we compare modern drives to the first ones we can see that technology has significantly advanced. The first hard drive was made in the year 1956 by the company IBM and it was called IBM 305 RAMAC. It was significantly bigger than modern drives and also very expensive. Considering the inflation, today the price for it would be 150000 dollars, and it wouldn’t fit in any housing of desktop PC. The complete computer system, where the first hard drive was built in, took place of one whole room.

Modern hard drives are way better than his precursors in all specifications. They are significantly cheaper and affordable to more people. The capacity of modern hard drives is not comparable to the one of the older drives, known around year 1960. The capacity is measured in gigabytes (GB), and modern drives easily store more than 1000 GB of data. Also data access time is much shorter, but the main difference is size. Today we find hard drives almost everywhere and we don’t need a whole room for a computer anymore.

Like all electronic accessories also hard drives are not immune to different damages. Read head, which reads data from height of around 20 nanometers, can be confused already by smallest damage and it results in inability to read data, and the impact can cause head to hit the magnetic surface and cause even more damage and data loss. Damages in this area can be results of impacts (in case you drop a drive off your hand), damages because of the age of the drive, sudden cut of power, malfunction in electronics, corrosion or low quality of production of heads or plates. The problem of these damages is that they are not repairable. When you get the damage, data is lost and you usually can’t restore it, and a hard drive is not usable anymore.